In 2014 Mattel released two series of Geek Shriek ghouls, together they were: Frankie, Gigi, Catty, Howleen, Abbey and Ghoulia. All ghouls have kinda simple outfits and big glasses.

Story of my Ghoulia: In November, I managed to win an ebay auction for a really nice price. It was the last Ghoulia doll (except the SDCC one) missing in my Ghoulia Collection (or at least I thought so, I forgot the Date one)- She was supposed to arrive withinga  week via the Global SHipping Program. SO I waited... for a week... two weeks... and nothing. The tracking number provided did not work. So I sent a meage to the seller, asking about her. He replied, that he had sent her on the GSP llong time ago and that I have to ask them. When I asked him how, when my tracking number doesn't work - he hasn't replied. So I waited, hoping, but she did not arrive. So I got my money back (after some struggles). He didnť even reply when I asked if he doesnť have one other, because she was of almost a half price from what I could get from ebay (because this one was from the UK and the other were from USA and the postage from there is absolutelly horrible).
But I managed to get a second-hand one after some time.


So here she is (no in-box pictures this time) 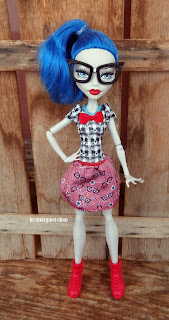 She wears a light gray T-shirt with black skull ornaments. Neither the sleeves, not the bottom of the shirt has hemming. And she has a red bowtie - because BOWTIES ARE COOL! (Not sure if Mattel meant it that way, tho :D) 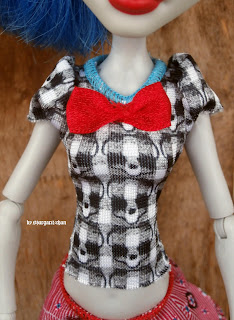 She has a simple gray skirt with red geometrical ornamenta and black galsses (same as her own) and eyeballs. The skirt has only a rubber band, no fastening at the back. 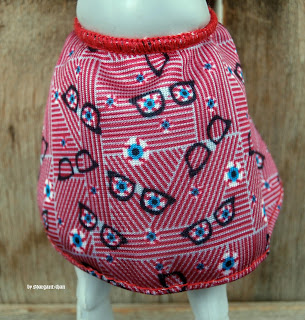 She wears simple red shoes (even tho these would look way better and would match the outfit better if they had at least gray shoelaces!) This type was recycled numerous times (Ghoulia's Comic Club Fashion pack, Studen Disembody Council, Coffin Bean...) 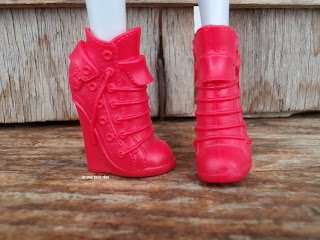 Her only accessory are these glasses - retro, pointy, black with white "tape" in the middle. 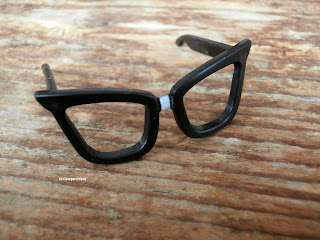 And here are the glasses on the doll. 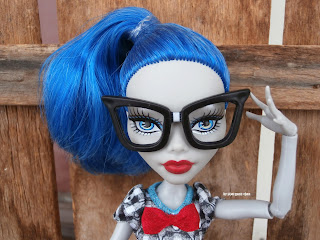 Ghoulia has vivid blue eyes as usual, her eyeshadows are silver and she has a red lips (I sol love the vivid colors on her lips, looks great on her!). Unfortunately, this ghoul has each eye in different size and they are not aligned, but whatever, you can't see that much behind the glasses. 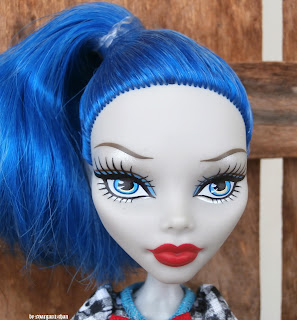 Her hair is tied a ponytail, slightly moved to one side. Her hair is darker and shorter than usual, and it's not her usual light doll-grade kanekalon. Unfortunately, as you can see, her hair is a bit thin and very, VERY greasy :( 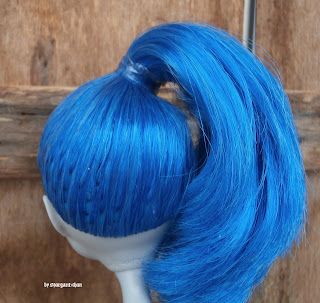 And when I undressed her, I found that she has a awful stain on her collarbone. And that the t-shirt probably stained her arm. It won't be visible when I display her in her original clothes, but still... 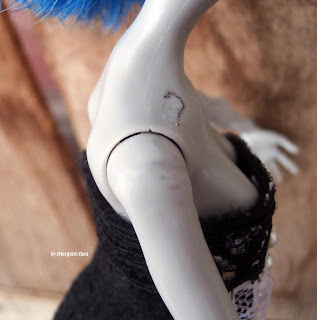 Even tho this line is supposed to be a "budget" line and even tho they recycled eyerything the could and made the clothes as plain as they could, and even tho these dolls have no accessories (except the glasses - they have no stand and no brush, they don't have pierced hair and have no jewellery), they are pretty expensive. And because they were released in limited amounts and weren't sold everywhere, the prices get even higher. Well done, Mattel! 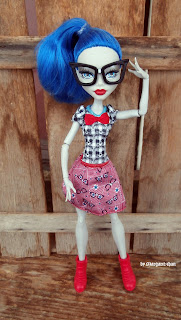