Ever After High Crystal Winter (EN) 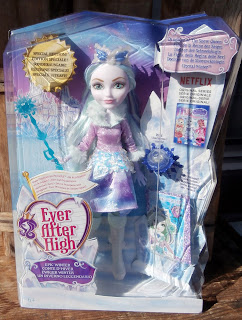 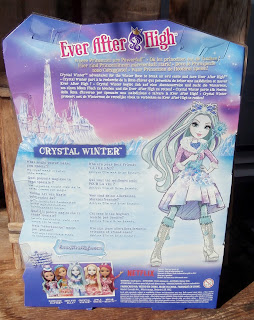 Unlike other "basic" releases of EAH characters, Crystal doesn't have a diary - she just has a little card. 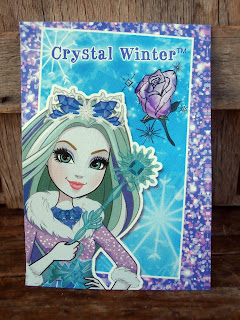 On the back side of the card, you can read a little about a "winter rose". 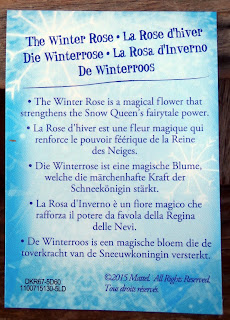 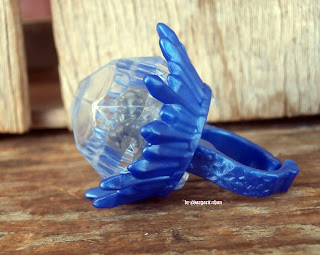 At first I thought the dome could be removed and you could see the rose, but looking at the back of the ring, I don't think so (I haven't tried it, tho). 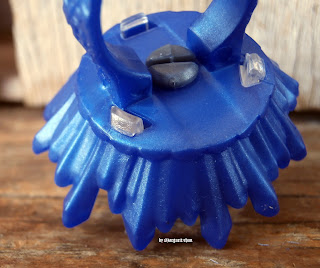 So here she is: Crystal Winter 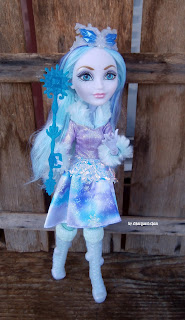 Crystal is one ot thrre EAH characters (the other two are Faybelle a Kitty - or there can be two more, if we consider the "darker pink" on Farrah a Bunny) who doesn't have a "normal" skin color. Her skin is a light lilac, she has blue eyes and silver and purple and glitter eyeshadow,  pink lips with pearl touch and brown eyebrows, despite having light hair (I don't like that). 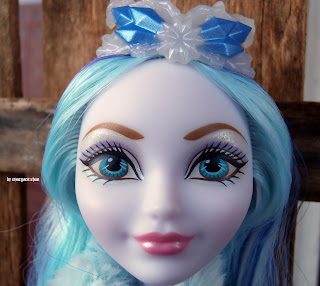 As a daughter of king, she has a white and blue "crystal" crown. 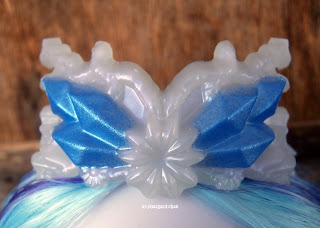 The crown has little combs on side, which should be enough to hold it in place, but it is also secured by teo plastic Ts and also a rubber band. 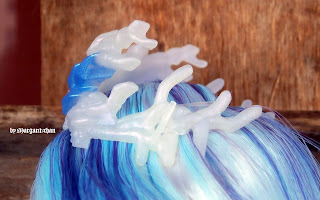 And as a princess, she has a winter scepter/wand, which has an important role in the story. 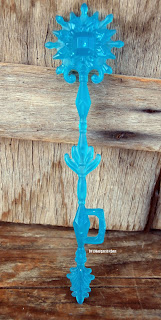 Crystal is wearing just one piece of clothing - it may seem like a skirt and a jacket, but it's actually a one piece dress. The top is from light violet color with "silver scales", with mint faux-fur on 3/4 sleeves and on colar. 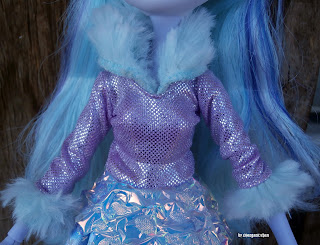 She also hes two skirts - one really shot overskirt, with tattered edge, made from plastic, and a blue, white and purple "satine" skirt. 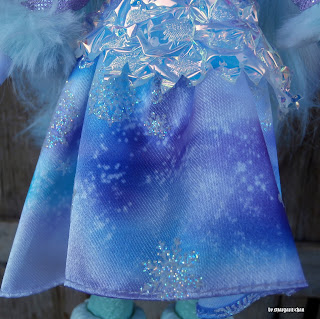 The lower skirt has glittery snowflakes on it. 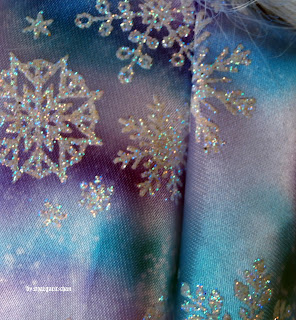 Crystal wears knee-high boots made from white opalescent plastic, which really gives them a "icy" look.

They also have a heel in a shape of an icycle and a painted "fur" on top. 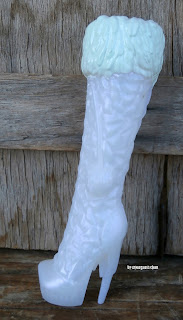 At first, I thought she wears stockings or leggines. No, she does not. Her legs are painted.

They are in mint color and there are ornaments and snowflakes on them.

Well, I said that they are painted. No, they are not. They are made of colored plastic. The only painted parts are her "panties", but this paint is done very badly and it's not the exact color as the legs. 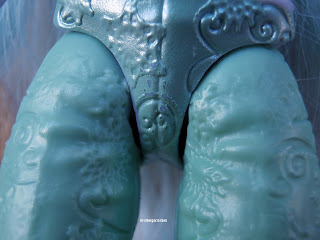 Crystal has long hair, which is mostly white, bot at the front hairline and in the parting, she has mint colored hair, and also in the parting she has purple and dark blue streaks. 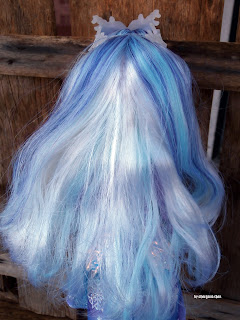 Basically, it's the same color scheme and mix as Monster High Twyla has, but since Crystal's hair is mostly white, it looks lighter. 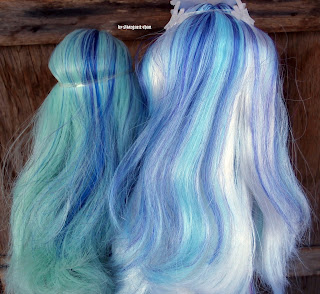 When I first saw Crystal at toystore, I thought she is the same as Twyla - same hair, same skin, but it's not like that. Crystal is much lighter. 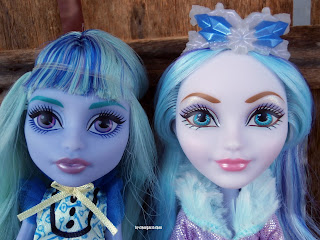 So if I should say something about her overal: This "Special Edidtion" means that she comes with a little plastic ring. She has no diary, no stand. Aside from a crown and a wand, she has no accessories - no purse, no belt, no ring, no earrings, no bracelet, no necklace - which is pretty lame for a princess (and for a doll for this price). She has just one piece of clothing - even tho it would be much better if it were a dress and a jacket. She has no leggins, but intead she has colored legs. So overal - this is pretty lame for a doll, which was for at least 40€ (I have her for 19€ and I still think it's a bit too much for this). Very cheap :'(