Shriek Wrecked is a pirate-sailor series with 7 chracters in totall - three in "standart edition" - Draculaura, Rochelle and Lagoona, one "extra" Dayna Jones, three "budget" - Catrine, Gil and Clawdeen, and one BIG Gooliope.

Gooliope has a big box, but she is not standing there (like some of the Frightfully tall ghouls), but she is in position similar to her basic release. 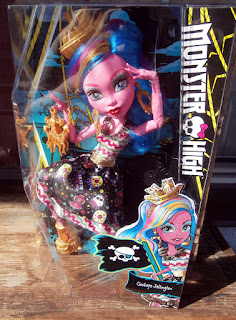 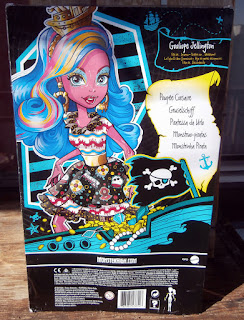 I wanted to write "detail on a boxart", but this one is so big, that it is almost on all the back side of the box. 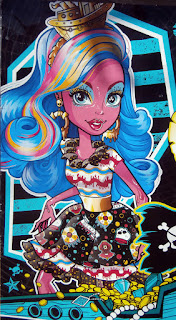 Gooliope is big. So BIG, that she almost didn't fit in front of my usual photo background. She has a lot of pirate motifs on her outfit and accessories and she has blue hair. Her original release had pink and yellow hair, but I think it wasn't a good choice for her dark pink skin. 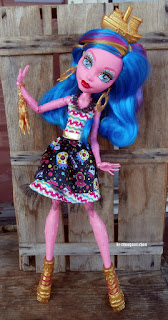 I love her blue hair - I think it suits her a lot better. Her hair is in darker vivid blue and it is long almost to her waist. But even tho her original release had saran, this is just nylon (not so good quality). 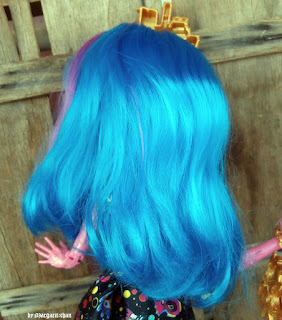 Gooliope has a parting at one side and a few yellow and pink streaks in her parting. One part of her her is tied above her ear and she has a headband stuck under this hair. 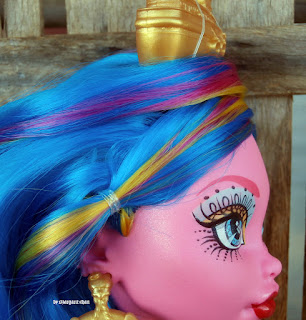 The headband is a dark gold ship - and what a ship! It is really detailed and it has an eye and some pointy teeth! But it'sjust one-sided, from the back it is just a rear side of a hollow shape (like you can see on one of the upper pictures). 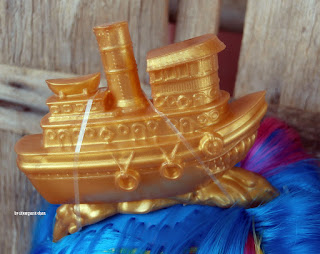 In the same shade of gold as the ship are her earrings in shape of a rescue ring (it has stars on it and some blobs under it and it her ear, she has a tiny skull with a tine sailor hat!) 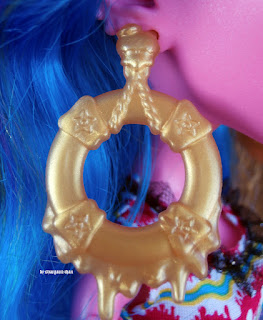 Gooliope has red lipstick, blue and yellow eyeshadows and light blue eyes (I think it's lighter than her original version) with an interesting reflection.  Her eyebrows are dark pink. 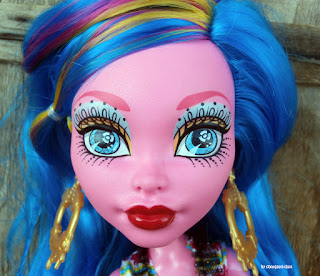 She has a one piece dress with two wide skirts. The top has no sleeves, but has a black tulle ruffle around neckline. On white background, there are red wave-lines and blue wave-lines with yellow lining. 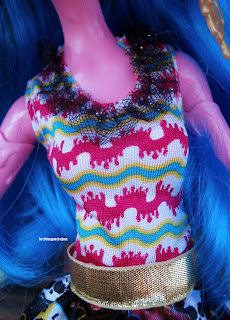 She has a gold wide ribbon-belt and a blac over skirt. It has some colorful bubbles, ribbons with "BLOB" and life-saving rings (also with BLOB). 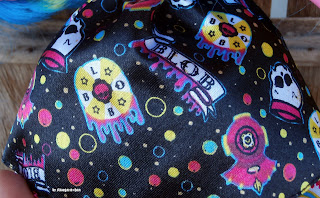 The lower skirt has the same imprint as the top of the dress and it has black tulle ruffle at the botom. 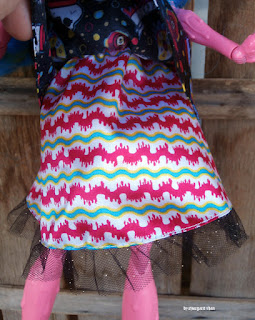 She has the same purse as Vandala - just in dark gold color. 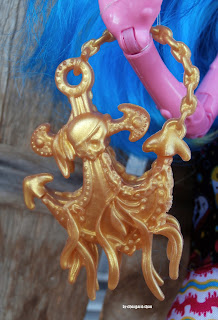 In the same color are her boots - gold with a little red details. 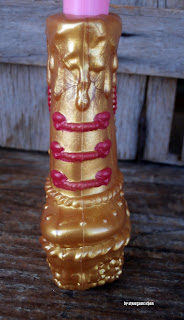 It is full of her "blobby" details  and a rope. The platform of her shoe is made of a lot of tiny gems. 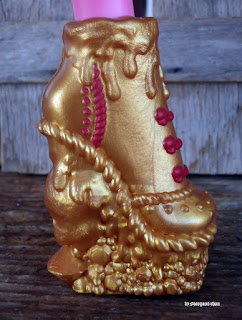 At first I couldn't make up what her hell is, but when I looked from the back, I found out that it is a skulette and a diamond.